A Bridge To Nowhere.

Like a lot of adults with a misspent youth can say, I used to be in a band.  We played a lot of rock and punk music because that's what garage bands were supposed to play, and that is what my friends and I were into. I would never have admitted it to my friends then, but I really liked bluegrass.  Particularly, I liked and still really enjoy the banjo. I always wanted to learn to play one, but until recently, I never took that dream particularly seriously.   It just so happened that my wife's parents had one buried in their attic, along with the obligatory creepy attic contents proper old houses are supposed to have.  I asked to borrow it and they obliged with eyebrows raised, really?  The banjo?  My wife, who thinks banjos sound like cats caught in a shop vac, said the same thing. I brought the banjo home and opened the cardboard box it was kept in and realized that it was unplayable.  It was missing a bridge, a little (usually wooden) piece just before the end of the banjo that keeps the strings up off of the head, allows them to vibrate freely, and to make that oh so sweet sound.


My first thought about the missing bridge was, uh-oh I bet those are expensive (they aren't).  Against her better judgement, my wife said, "why don't you just make one, they are basically just a wooden block."  It was that moment I realized I could kill two birds with one banjo.  I could get out in my shop for a while, a rarity these past couple of weeks, and I could make my own bridge.

I went out to my refuge and grabbed a couple of walnut cutoffs from my milled walnut tree and an old piece of ebony I have been holding on to for just such an occasion, and quickly realized I had no idea what I was doing.  After returning to the house and scouring the trusty old internet for a while, I found a great reference website for my project.  Http://banjobridge.com/ has a ton of information if you are curious about making a bridge for a banjo.  Whats that you say?  You're a guitar enthusiast?  A cursory "Google" search for "make a guitar bridge" also turned up about 45 million results, so if you are interested, give it a shot.

Now armed with just enough information to be dangerous, I returned to butchering my walnut. With a hatchet, I split a large tapered piece (so the bridge would be quarter sawn) from the scrap.  I then cut a small piece with a handsaw, now tapered from 1/2 in to 3/4 in and about four inches long. Then I cut a thin piece, about 1/4 in by 3 in, of ebony.  I must apologize for the ridiculously staged, after-the-fact photos.  I was happily photographing my process along the way, and then realized I had no memory card in my camera.  I thought the days of no film in the camera were long gone, but apparently technology doesn't cure stupidity.  So, please ignore the obvious fact that the steps don't seem to follow the order in the photographs. Use your imagination. 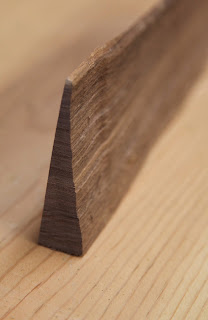 I used a small block plane to straighten up the top and bottom of the walnut piece and to clean up the bottom edge of the ebony strip.  Then I glued the two pieces together with the ebony strip on the small end of the tapered walnut.

At this point a molding plane would have been handy, but I was able to successfully shape the concave profile using a carving gouge.  Scratch stock might have worked well here as well, and if I was going to make several more of these I'd give it a try.


Next, I shaped the "feet" with a round file, by just happily filing away until I got bored found success.

I then shaped the sweep on the sides with another carving gouge.  This worked much better than I thought, however, I did hone the gouge to within an inch of its life to assure it was razor sharp before I used it to lop off the edges. 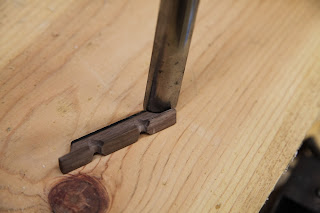 Because the tools I used to shape the bridge were good and sharp I barely had to do any sanding, but I did clean up some edges with a little 250 grit sandpaper.

A tip I got from banjobridge.com which worked really well, was to use welding tip cleaners to form the tiny grooves/slots in the ebony for the strings to sit in.  This tool, if you aren't familiar, is a little metal container full of tiny round metal files used for cleaning out the tips on welding torches.  They are great for cleaning out all kinds of tiny openings and they are usually under five bucks at your local hardware store.  I just matched the size of the file to the size of the coordinating banjo string and filed in the groove.  They worked perfectly!


I finished the bridge with a couple coats of beeswax rubbed in with a cotton cloth and it darkened up the walnut nicely.  I used George's Club House Wax, not because I'm going to eat the bridge, but because it's just beeswax and mineral oil and I didn't want anything funky seeping out onto the banjo head. 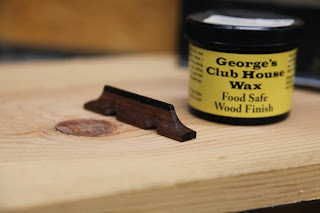 I'm certainly not going to become the next Antonio Stradavari, but for my very first venture into making an instrument accessory I was pretty happy.  Now, if I could just learn how to play the darn thing! 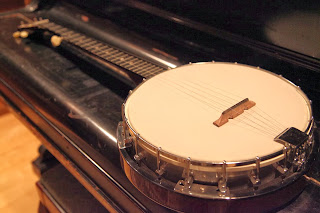