Often, my addiction to tools takes me on weird tangents through stores like woodcraft or through the virtual aisles of online markets.  Three or four years ago I came across a set of gimlets from Garrett Wade during one of their crazy sales, and like a zombie on a brain bender, I just threw them in the cart with the rest of my stuff and mindlessly checked out.  When they arrived, I tested them out on a small project which required pre-drilling some very small holes for copper pins.  After a little bit of tweaking I was amazed at how quickly these little guys worked.  I stuck them on a D shaped carabiner, clipped them to my tool belt, and have never looked back.  For infrequent, small holes these beat carrying my drill around any day. 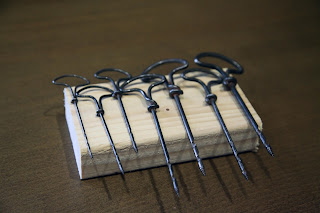 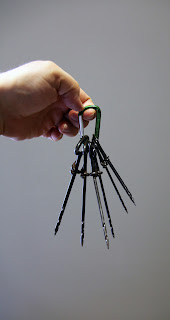 Like a lot of hand tools, gimlets, in their crudest form date back a long way.  The earliest form of a gimlet was likely spoon shaped and probably shared more traits with a bradawl or birdcage awl with a T shaped handle.  This style has been found in several Roman archaeological sites.  The auger style bit has taken many forms through the centuries and has had countless offshoots in style and function.  The gimlets we recognize today were likely designed in the early to mid 1800's as manufacturing techniques improved.  Today there are still several manufacturers of gimlets.  Some have plastic handles, some have wooden handles and some are forged from a single piece of wire like these. 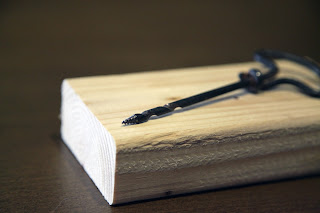 Out of the box, the screw style tips needed to be touched up with a small needle file because they were dull and tended to split thin stock.  Rather than explaining how to touch up the threads with a file, I'll share the quicker method that I use instead.  I start a small hole in a piece of scrap wood with the gimlet that needs sharpening, smear in a little polishing compound and a little oil and work the gimlet through the hole.  It sharpens it up beautifully, and I can avoid the potential slip up with the file that can ruin the tiny threads.  Unless the threads or cutting edge have been badly damaged, this method is quick and works for screw threads on any tool...including screws... 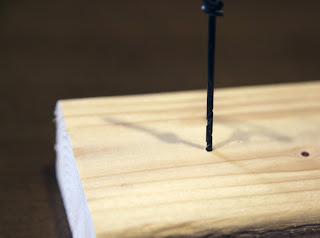 I use these gimlets for small projects as often as I use them for large ones.  They work great for starting pilot holes, through holes in thinner stock and when accuracy is needed (think holes for hardware) these little guys excel.  I don't find myself using the largest gimlet very often, because if I am drilling a hole that large I tend to pull out the drill.  The smallest gimlet, however, gets the most amount of regular use, plus frequent abuse as an emergency stud finder.