"Ancient Chinese Proverb," and my father in law's life mantra.  I have learned volumes from my wife's father in terms of initial planning and slowing down when I work in the shop.  Occasionally, though, I catch myself slipping back into my old habits.  Whether it was lack of sleep (teething baby), or just lack of user head space (brains), I made a mistake this weekend so heinous that it caused me to check and assure myself that I had at least put pants on that morning.

Realizing that my pants were in fact where they should be, I turned my attention back to the ugly atrocity at hand.  I had managed to not only mark, but to happily cut (probably with a stupid grin on my face) several dovetails totally backward, you might want to hide your children's eyes from the horrific images below.  I was re-marking these when I decided I'd better own up to what I had done.


I am making a test piece/model for a piece of furniture I am, ironically, building for my father in law.  This one, which I will be posting in detail on the blog (very soon!) I have chosen to make only from pine I was able to purchase at my local big box store.  I will likely turn this into a piece of furniture for my wife's closet and outfit it with some Ikea closet hardware for storing shoes and clothes.  The final piece for my father in law will be out of oak and should resemble a bookshelf/hutch. I'll be posting that piece as well if I ever get this one out of the way.  This test piece I will likely just paint (milk paint), as the wood isn't really anything to write home about.  This makes some of the minor nicks and dings in this one much less of a big deal.  If there was one redeeming aspect to this glaring, horrible, ugly mistake it did turn out to be a great chance to put one of my little "gem-of-a-tool" saws to work.

I had originally cut the dovetails with my LN carcass saw which, as always, worked beautifully.  The plate and set on this saw was much too wide to correct my blunder though. In stepped my Zona Razor Saw to the rescue.  It has a super thin plate and 24tpi so I could start re-cutting the dovetails exactly on the corner of the tail.  I marked each line with a marking knife to start shearing the fibers right off, this also gives the saw a little bit of a guide line.  For an 11 dollar gentleman's saw, this little guy always works perfectly!


I also used a little Veritas aluminum dovetail marking gauge for this project that was worth the 8 bucks I paid for it four or five years ago.  It came in a set of 2, one marked for 1:8 (hardwood) and the other 1:6 (softwood).  They are accurate, lightweight and they are reversible so they work on both sides of the board. They have some new ones available today that are also very nice, and there are a couple more manufacturers in the game now.

Needless to say, the fix took me longer than cutting the dovetails in the first place but they will work once I smother them in paint.  The next set went much better.  I had also poured a half pot of coffee down my gullet by this time, so I was thinking much more clearly.  Hooray caffeine, boo stupidity. 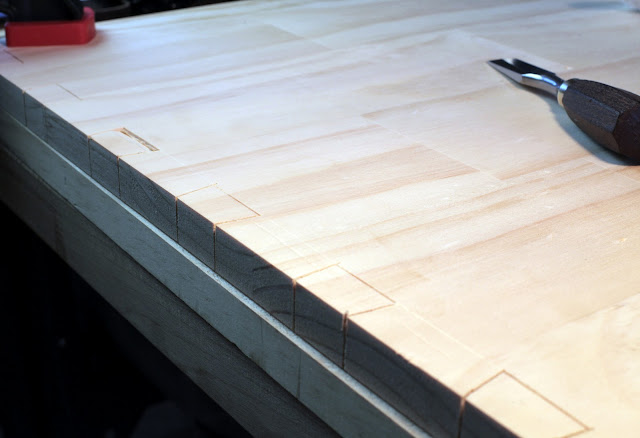