Love Is In The Air?

Love was not an original tenant of the feast of St. Valentine until Chaucer wrote about birds unexpectedly mating on "Seynt Volantynys Day" in (or around) 1382.  In fact, nothing is really even known about St. Valentine including which martyr he actually was (there were apparently many named Valentine).  Due to some miserable experiences on previous such holidays, I have never been much of a Valentine's Day celebrator (fortunately for me, neither is my wife).  I decided that this year I would give new meaning to this vastly overrated "holiday."

Love is still part of my New Order of St Valentine's Day or N.O.S.V.D. (okay, so the name needs some work), but this isn't the sappy cartoon hearts, gross chalk candy and creepy naked cherub love that surrounds Valentine's Day now.  The concept behind N.O.S.V.D. is the love for hand made objects and the tools used to make them.

Quite often, I find that a hand made object can both inspire my need to make something and give me that deep down burning sensation that only an antacid or a glass of milk can cure (still better than the burning sensation that comes from a bad Valentines Day, right?).  I recently replaced a dust brush in my shop with an antique barber's brush that I found in an antique store.  The original dust brush was a boring paintbrush looking thing that I was rather happy to replace with this beauty.  It has a turned handle and natural bristles (horse hair maybe?) which are tight enough for it to work well as a dust brush for my tools.  It was used with care for years before I stumbled across it, but it is one of the many tools I own that inspires my work. 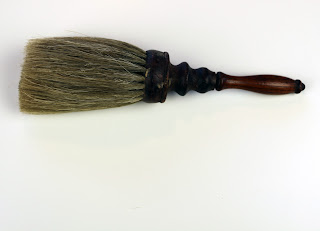 Another recent acquisition which I find inspiring me is a horribly beaten and abused T.H. Witherby chisel.  I don't know if I'll ever be able to whip it into fighting condition, but I do know it will prove to be a good user once I get it cleaned up and sharpened.  You can see the ages of abuse and mishandling it has seen in the pitting and "nice try" sharpening attempt.  There is something about old steel that is strangely inspirational.  Someone forged this tool from raw steel more than a hundred years ago, and with the right amount of care it will once again perform its original intended duty.  If I can make something with this tool that has only a fraction of the inspirational qualities this tool has, not only will it be a miracle, but I will have been able to honor this tools maker in some small insignificant way.  Maybe, it just makes me feel better about not spending more time in my shop? 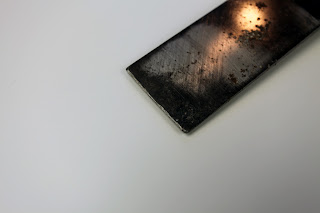 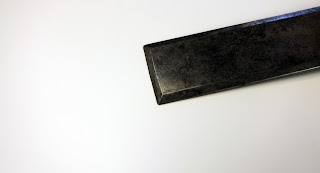 Several years ago I found and immediately fell in love with the Greene and Greene style of architecture.  As I usually do, I immediately planned a project to start practicing some basic architectural elements of my new-found crush.  One of the first things I made was some base molding for a set of stairs I was building in my home.  This particular base molding includes the unnecessarily over-sized finger joints shown below.  I made the molding out of scraps from the Brazilian Cherry stair treads.  I also sacrificed a bunch of skin from my fingertips which was worn away by the constant sharpening of chisels due to my insistence on working with such a hard species of wood.  So, to make a long story longer, they are now one of those objects in my home which inspires me to do more work. 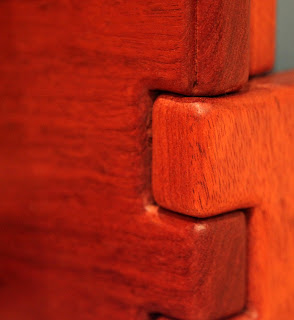 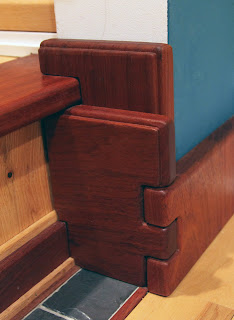 So I encourage everyone to celebrate this N.O.S.V.D. by either making something inspirational, or finding something that inspires you.  Sometimes, I just stare at handtools in my workshop for inspiration...should I not have admitted that?
Posted by Collin