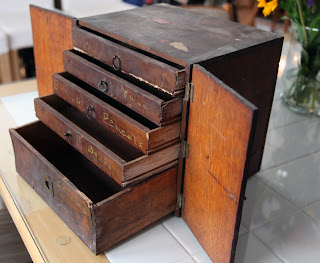 I had a friend in college that inherited a home from his grandparents.  The home was a stunning and enormous brick Gothic Revival that he remembered from his childhood.  He was certain it was going to be the home he would move his eventual family into after he served his time in the Air Force and settled down.  He went to visit the house as a side trip on his journey home for winter break from school.  He hadn't seen the home in a long time, as his grandparents had moved into a retirement home after his grandmother had fallen ill almost fifteen years earlier.  Fortunately for him, his grandparents saw fit to keep the house even though they no longer lived there.  Upon returning from our winter break, I asked him about his visit.  His face immediately fell.  "They didn't hire anyone to keep it up" he said.  The house, after years of neglect had been all but swallowed by the wooded lot on which it rested.  The roof had caved in, the cellar was full of water, and the floors had started to rot.  As it turns out, his grandfather who was a professional carpenter at one time, had ambitions of returning to the house every so often to maintain the residence and do some minor improvements.  Over the course of the first year he spent in the retirement home with his wife, he too had fallen ill and neglected to ask anyone to help him take care of the house.  The years passed and whether through miscommunication, lack of interest, or just plain forgetfulness, the home started to quite literally fall apart.  As a result, my friend, while excited about the eventual prospects of the property, had inherited a crumbling money pit.


I too inherited something from a family member.  Mine was from my great grandfather.  Fortunately, for me the repairs necessary will mostly just cost me some time.  Unfortunately, it's not a brick Gothic Revival house on ten acres of wooded lot.  I got a box.  My great grandfather passed away long before I was born but my mother ended up with his small, hand made machinist chest.  The small chest sat in my parents garage until I paid them a visit last year and asked about its fate.  They were excited to get some stuff out of their garage, and I was excited to have the little box. 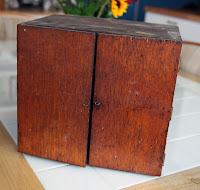 I was using it the way I found it for a while, but like the old abandoned house, neglect had blanketed this set of delicate wooden drawers.  Some of the joints had weakened, a small repair (nails through dovetails) had started to fail, some drawer bottoms were cracked, the front doors were added later and didn't close all the way, and the drawer runners caused the drawers to stick terribly which resulted in my stuff being all over the floor on more than one occasion.  I have hesitated to refurbish the box because of the sentimental value of its current appearance.  I am the fourth generation of family to use this thing, little repairs from my grandfather are apparent, a repair or two from my great grandfather and a repair from either my mother or father can be seen.  I can also see their personalities in the repairs, and now I know where some of my symptoms of adult ADHD come from.  Some of the boxes additions and repairs are slapdash, uneven and hurried, while others are carefully executed.  I won't say which repairs belong to which people, but I suspect my grandfathers propensity toward the immediacy of the moment may have led to more than one perfunctory fix.  Time has not been gentle to this cabinet, but fortunately it had been kept out of the elements and most of the wood on the body was in good shape.  I'd also like to make brief mention of my great grandfather's choice in material, some beautifully figured quarter sawn oak with walnut burl veneers on the drawer fronts.  I'm not sure who added the veneer but I don't believe it was original to the drawers.

I noticed recently that the box of drawers has sat empty in a corner of my shop eating space and collecting dust.  I don't use it anymore because it is no longer really functional.  I can't imagine my great grandfather ever wanting that fate for his little machinist chest.  So, I have decided to refurbish this little gargoyle.  Rather than going to the extreme of totally re-doing the box (re: some famously beautiful ones done by Txinkman)  I am just going to do the minimum it needs to be functional again.  I won't be getting rid of most of the deep scars.  I will be refinishing the chest as it's current finish is starting wear off.  I'll be replacing the drawer runners, a couple drawer bottoms, the back panel (currently a non-matching piece of dark stained, nailed-on luan plywood), polishing the hardware and re-gluing the carcass.  I'll post some photos during the process.

Taking this box apart got me thinking about some other projects that I have been debating.  It is one thing to refinish a truly fine antique (a no no among many true antique collectors) but it is another to refinish some of the antiques I own.  Some antiques go from being worth thousands of dollars to not being worth the warmth their wood would bring if it were set ablaze once they are refinished.  I don't own any antiques like this.  Most of the antiques I own look like they were pushed down a flight of stairs by lazy movers or mauled by a glaring of wild cats (today's fun fact: a group of cats is called a clowder, or, and more appropriately...a glaring......you're welcome), and as such, a few of them are useless unless they are repaired or refinished.  I have been moderately successful at making some well executed repairs with period correct materials, but to be honest making some minor improvements to most of my antiques isn't going to make them any less valuable...just more useful. 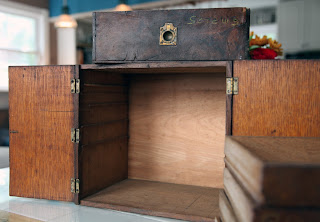