"Chop your own firewood, and it will warm you twice," is a quote often attributed to Henry Ford, however, it seems obvious that it was probably around long before he was born.  Henry Ford, despite some of his shortcomings, was not a man to waste anything.  In fact, Kingsford charcoal was originally started by Henry Ford and E.G. Kingsford (a relative of Mr. Ford) as a way to make money from some of the scrap wood coming off of the Ford Motor Companies assembly lines.  The wood was turned into charcoal and suddenly his waste wood became a useful and profitable industry. 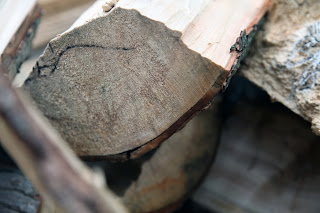 While I am not particularly interested (at the moment) in starting an industry from waste products, I am interested in some wood that people are ready to set ablaze.  I like splitting firewood by hand.  It is good exercise, it's simple and repetitive, it gets me outdoors, it gives me a chance to zone out, and it's both aggressive and zen-like at the same time.  The only drawback is that I don't have a fireplace.  Our house was originally outfitted with potbelly stoves for warmth instead of full fireplaces, a bummer for me over a hundred years later (as small children and hot iron stoves in the middle of the room do not mix well).  I do, however, have friends and family that appreciate some split firewood from time to time so, fortunately, I don't have huge mounds of chopped wood just sitting around.  One of the best results of splitting wood is that occasionally, I'll find something that I decide to hoard in my shop (along with too much other junk). 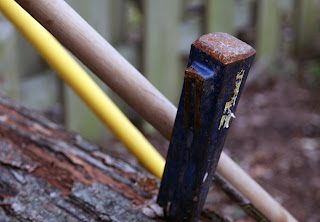 While sending the splitting maul through a piece of maple, I found the beautiful piece of pink hued, slightly spalted maple below.  I set that section of the tree aside and set back to work splitting up the rest of the wood.  From maple, to walnut, to oak, I have found quite a few beautiful pieces of lumber just by paying attention to the wood I'm splitting for the winter...plus its free!  I'll let this piece, and the other four or five just like it, dry in the shop for a season before I turn it into something.  In this case this piece will become a saw handle, as will some of the others if I don't turn one or two on the lathe first. 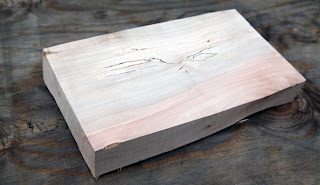 Speaking of the lathe, I have turned more practice pieces from "firewood" than I care to count since I set up my lathe last year.  They are often great pieces of wood which take only seconds of prep with a small hatchet or the bandsaw prior to chucking them into the lathe.  Additionally, if I screw up and wreck one I can just toss it in my neighbors fireplace and keep warm while I mooch his wine without worrying about how much I paid for my practice mistake (read: kindling).  Now that I think of it, another benefit to splitting wood for other people is that sometimes they will give you booze for firewood (suckers)!

So next time you have a small project planned, need a new handle for a chisel or saw, are in need of inspiration, or just want to stay warm, consider splitting some wood. 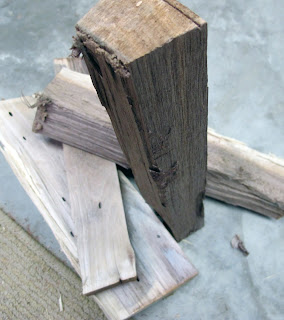