Several years ago I purchased a set of eight WoodRiver brand bench chisels from Woodcraft.  WoodRiver has started to produce some very well designed tools at budget prices, especially when they go on sale.  They have produced chisels, handplanes, screwdrivers, awls and other tools and I'm sure they have more in the pipeline.  This set of chisels was on sale for almost half price and when I saw this set on the shelf I thought, hey, half price chisels, that's almost as good as half priced burritos!  Plus, there were eight of them which included a 3/8" and 5/8" chisel which I was sure I needed. 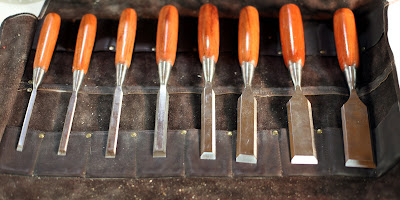 For some reason Woodcraft has stopped selling these in a set of eight, but they have a set of six for $83.99 and I have seen them on sale for much less from time to time.  The newer chisels have some improved design features, mostly in the socket/ferrule arena but they seem very similar otherwise.  Additionally, they have a set of four butt chisels which seem equally well designed.

I must say, this set of chisels has served its purpose but they do have some drawbacks.  I won't try to compare this set to my Lie Nielsens or my coveted Blue Spruce chisels which, in my opinion, are in another league altogether.  This set is intended to be a set of starter chisels for woodworkers on a budget, and they are exactly that.  To keep these in their current price range they had to sacrifice the level of finish.  This is similar to purchasing furniture you have to assemble at home.  "Some assembly required" furniture is typically less expensive, but you must invest a considerable amount of effort to get it to work (unless of course, you just pile your books on the cardboard box the bookshelf came in).  I spent hours trying to get these chisels to perform.  They came with some considerable machine marks on the steel, and some rather deep hollows along the cutting edge. 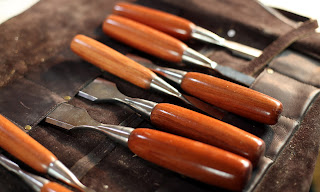 Initially, I had to grind off between a sixteenth and an eighth of an inch from the bevel edge of several chisels to remove the rather severe hollow that was present on the back of the chisel.  This was a slow process because I had to constantly be aware of the heat generated by grinding.  I kept my quenching bucket close and just gave them time to cool off if they started to get even the slightest bit warm to the touch.  I then spent a good long time flattening the backs of these chisels.  The smaller chisels were obviously less work but I spent a considerable amount of time
flattening the larger ones.

I was eventually able to get razor sharp edges on all of these chisels and I was initially very happy with the results.  I have tried just about every bevel angle I can think of on these things to include micro-bevels and curved bevels. Unfortunately, none of these chisels hold an edge very well at all, no matter what angle is ground on their bevels.  If I keep my honing plate or leather close by, I can use these chisels all day long.  Even in the softest woods, though, I need to
constantly hone these chisels as the edges roll easily when
used with a mallet.

I do find each of these well balanced and the nicely finished, bubinga handles are comfortable for me to hold.  Additionally, the handles have held up well to several years of abuse as I have taken to using these chisels on construction jobs as well and I have been pretty happy with their performance. 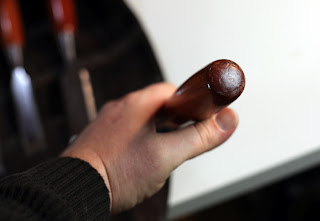 If you are on a tight budget and need some chisels now, I'd feel comfortable recommending these.  I would caution though, that these can be frustrating to use without understanding that they will need consistent honing while working with them.  If you aren't in need of something immediately, it might make more sense to sell some more girl scout cookies, blood or a kidney and save up for a higher end set that will require less initial setup and work interrupting honing.
Posted by Collin