We got nukes, we got knives, sharp sticks....

There is something about a truly sharp edge honed onto the side of a piece of metal that has fascinated mankind since he first discovered the ability to anneal copper during the 5th and 6th millennium BC.  Prior to the annealing process (heating metal to increase strength and hardness) most tools were stone, bone and sticks.  Metallurgy paved the way for a rapidly growing culture to begin using more durable metal tools for farming, construction, hunting, and warfare.  Of course the most important thing to come out of this new found technology was the ability to make the tools themselves!  Making tools...obviously more important than being able to hunt dinner faster and way cooler than being able to conquer your neighbors village because they still use sharp sticks rather than swords.

The annealing process is suspected to have happened by accident.  I am convinced that the best inventions happen that way, just look at rubber, plastic, penicillin, and silly putty!  Annealing may have happened as stone age societal members hammered copper ore and accidentally dropped it into the fire, just like the way I usually make Smores.  The annealing process allowed a sharp durable edge to be put on the tool.  No more were the days of wielding a huge sword into battle only to have it fall limp before your enemies...how embarrassing!  With the ability to create a lasting edge on a metal tool, came the need for methods to sharpen that tool.

Sharpening tools is a skill that has been around for a long, long time as you can imagine.  As a result, there are about a million different ways to scrape off metal until the edge of it is sharp.  I am hoping to cover a narrow spectrum of woodworking tool sharpening over the coming weeks.

When I purchased my first set of chisels (many many moons ago) I brought them home and immediately tried to butcher some wood.  I pulled them out of the package and touched the sharp end of the chisel with the edge of my thumb.  It was sharp... I guess.  I, of course, assumed that this was the sharpest these tools were ever going to get, so I proceeded to destroy some pine with them.  Little did I know that an off-the-shelf set of chisels require a considerable amount of work to put a truly sharp edge on them.  The same goes for many handplane manufacturers, and a majority of other hand powered tools.

Perhaps the fact that most tools do not come "ready to use" anymore, is a direct contributor to the decline in popularity of non-powered hand tools.  When those chisels refused to sharpen themselves, they sat on a shelf and I used other power tools to take their place.   They would have sat, alone and sad, on that shelf much longer if it wasn't for my father in law sharpening one of them for me.  Once I used a truly sharp chisel it quickly became one of my favorite tools.  It was easy to use, it responded well and most importantly it actually cut the wood fibers rather than mashing them to a frayed disgusting pulp.

I ran to the computer to do some sharpening research that evening.  I found about a thousand different opinions and the aforementioned million different methods for sharpening tools.  I ordered several different stones, some sandpaper and other items I thought I would need to sharpen the rest of my tools.  When they came in the mail I immediately set them up in my dining room heated workshop and started sharpening.  My first several attempts were almost enough for me to put the chisels back on the shelf and call it a day.  Not to mention the questions that arose, "what on earth are you doing NOW?," "you are going to clean that up, right?," "when are you going to make dinner?"  However, a fast dinner and persistence prevailed and I eventually put a nice sharp, polished edge on a chisel.  I was really proud because I did it freehand and managed to follow all the instructions, for once.  I shaved all the hair off my left hand testing it's sharpness and walked around for weeks wondering if anyone noticed.

I started sharpening all of my tools, and found that the sharper they were the better they performed...
DUHHH!!!  So with that, I will have many posts coming over the next couple of weeks ranging from theoretical, "What is Sharp" to the downright nitty-gritty details of how to get an edge on a tool with several varying methods, to how to maintain a sharp edge once it is achieved. 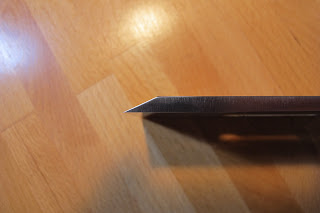 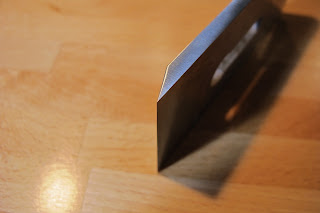